The “Big H” – History of the
Union Special Huntley Facility

In early 1948, “Union Special Machine Company” (as it was then called) purchased the “Fencil Plant”, a manufacturer of gaskets for machinery, in Huntley, Illinois.

At that time Union Special Machine Company had its main office and manufacturing in Chicago as well as a manufacturing facility in Germany. The Fencil plant covered 44,000 square feet, with additional land available for future expansion, and was purchased less than two years after the addition of three new manufacturing floors to the company’s main factory in Chicago. This step was taken to meet the continuing high demand for modern sewing equipment.

The Huntley Plant started production on May 3, 1948. It soon became a full production facility and performed all aspects of machining and painting of parts. The plant also did some assembly of the sewing machines.

1950’s – Four building additions were made at Huntley. The plant now totaled over 165,000 square feet of manufacturing space. All assembly lines had moved from Chicago and were now part of the Huntley plant.

1960’s – Union Special Machine Company purchased a Numerical Control Milling and Drilling machine that was used in the production machine shop. Union Special was one of the first manufacturers in the Midwest to purchase this type of machine.

The one millionth machine, a Class 39500 Union Special® sewing machine, was produced at the “Big H” plant in 1968. Excerpted from the April 1968 issue of The Needle’s Eye – “On hand to mark the occasion were manufacturing officials for the company, headed by William S. North, president. In addressing those present, Mr. North emphasized that credit for the company’s expansion and growth is directly attributable to the quality built into each machine and pointed to the fact that Union Special has more than doubled its manufacturing capacity in the past ten years.”

Three more additions were made to the Huntley facility bringing the total manufacturing space to over 282,000 square feet.

1970’s – In the early seventies a new Technical Training Center was built on the Huntley property and the company changed it name from “Union Special Machine Company” to “Union Special Corporation”. Also during this time, two more building additions brought the Huntley plant to over 376,000 square feet.

1980’s – Union Special consolidated the Chicago manufacturing operation to the Huntley plant. This required the tenth addition and expanded the manufacturing building to the current size of 418,000 square feet. The eighties also brought about Computer Aided Design (CAD) to Union Special.  The CAD gave the design engineers a tool for designing and testing new product designs on a computer before making a part in the factory. In 1988, Union Special  started the “Employee Involvement Program.” 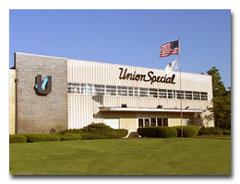 2000’s & Today – Union Special has now been in the Huntley facility for over sixty years.

In 2003, the company added a state-of-the-art vertical machining center to manufacture machine frames.  The company still produces the majority of its parts in Huntley including all loopers and spreaders.  The company does its own heat treatment, frame manufacturing, investment casting, CNC, stamping as well as machine assembly.

Many of the machines built at the ‘Big H’ in the last 60 years, even those from 50’s, 60’s, and 70’s are still being used today all over the world.  When they say, “they don’t make them like that anymore” they are not talking about Union Special because WE STILL DO!