When Jasper W. Corey vowed to build the best bag machine, he was ultimately laying down the foundation for Union Special Corporation. Together with Lorenz Muther and Russel G. Woodward the work on a new bag making machine began in the early spring of 1880 and was completed the same year. Known as the Union Bag Machine, it was placed in a bag factory in Chicago for a practical demonstration.

When compared to the competitive machines, it could produce more bags in the same time with greater ease, fewer repairs and less expense. The major advantage was the production of a 'double-locked stitch' by use of a straight needle. The Union Bag Machine was the most rapid chainstitch on the market - operating at twice the speed of existing machines.

The bag factory testing the machine was so enthusiastic that they immediately ordered twelve more. Corey in the meantime withdrew from the enterprise to pursue the study of medicine. Handicapped by a limited number of tools, Woodward and Muther, out of desperation, appealed to friends for financial assistance.

They attracted the attention of William Stanley North, a man of extensive business experience, dynamic force and integrity. North, convinced that the undertaking was sound and could be made successful by applying good business principles, organized the Union Bag Machine Company in 1881. He was elected the company's first president. 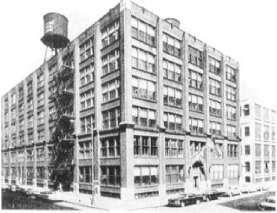 The Union Special Building in Chicago

In order to prove that the machine would reduce production costs, the company started its own bag factory where machines could be seen in operation under actual factory conditions. In a short time, bag manufacturers realized the advantages of the machine and the company was able to discontinue manufacturing bags, concentrating its efforts on sewing machine development and production.

The Union Bag Machine was accepted as the best and fastest on the market. Many were sold to the principal bag manufacturers throughout the country. The success of the Union Bag Company was assured. William Stanley North, as President, knew how to choose the right men for the right jobs - and his ideas were years ahead of the moment, planning for the future of the thriving young company. Research in design, materials and methods was an integral part of the company's operations from the start.

At a time when many industrial concerns considered research departments an expensive and usually useless luxury, the man who managed the Union Bag Company realized the importance of increasing the efficiency of all sewing operations through original research and engineering development. By 1885 - only four years from a small beginning - the variety of machines made by the company had so far outgrown the bag making field that it was deemed advisable to change the firm name to Union Special Sewing Machine Company. William Stanley North served as President of Union Special from 1881 until his death in 1908.

20 years after a very successful start-up in Chicago - in 1901 - a new production facility was founded in Stuttgart / Germany under the name 'Union Special Maschinenfabrik GmbH'. Fritz Wever - who in 1898 already took over the distributorship of Union Special for Germany - served as Managing Director and started production with 58 employees in 1901.

No.1 Bag Making Machine of the Stuttgart production
The first machine - of course for making bags - was a single needle machine producing a 401 stitch. The machine, known as No.1 or style G1900A, made up to 2200 stitches per minute and could produce 1400 bags (side and bottom seam) in a 10 hours working day.

A very close cooperation between Chicago and Stuttgart was the basis for the successful development of attachments and many new types for various seams. Within a few years the GmbH had 150 employees and branches for sales and service in many other towns in Germany. 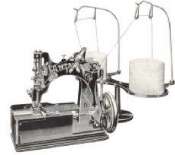 Bag Sewing Machine ‘Antaus’
Many generations of bag making and bag closing machines have been developed but the most famous machines of these early years have been No.3 - the so-called 'Antaus'- and No.4 – the 'Heracles' machine, which are well known up to date under these names. The Antaus was, similar to No.1, a single needle machine for sewing side and bottom seams or seams of hemming but was larger and stronger than the preceding systems.

A very tight and flexible double chain stitch could be produced on all kind of material. Later-on Nr.3 got type No. G80000. 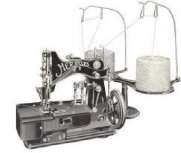 Bag Sewing Machine ‘Heracles’
The Heracles, known as style G81000A, was a single needle machine producing a durable and elastic overedge seam on side and bottom of bags. Both machines are still well known in all markets under the original names and are still sold as type 80200AA and 81200A- of course with newest technology.

A wide range of machines was produced - such as two-needle machine G1900C, Cylinder coverseam machine 11800C, interlock machine G76300H and many others producing various kinds of seams on bags and other articles of heavy material.

Union Special started with machines for producing bags and within a few years these machines were well known all over the world and accepted as the best for these operations. Therefore it was finally a small and very promising step to develop and produce also machines for closing filled bags - machines with another design, fixed on a column or on a similar construction or suspended by cable from tandem pulleys and counterbalanced by a suitable weight.

Bag Closing Head Style 14500
The sewing heads of style 14500 have been the most famous machines for a long period, they have been very flexible so that many users have found it easy to make their own special installations to suit their specific needs. Styles 14500 have been designed for closing filled bags of light to medium weight material and were producing chain stitch or double locked stitch. 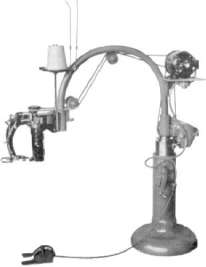 Style 20300C – economy machine with swinging head support; for bags weighing over 50 pounds.
In the 1930s a new sewing head was developed - class 80600. Designed for closing heavy bags such as are used for raw sugar, coffee, feed, chemicals, fertilizers, salt, starch and many other products. The universal machine for all kind of needs in the bag closing section was born and found new customers worldwide.

Suspended with top balancer or counterweighted or fitted to any kind of column, style 80600E (401 stitch) was the mostly wanted machine head. 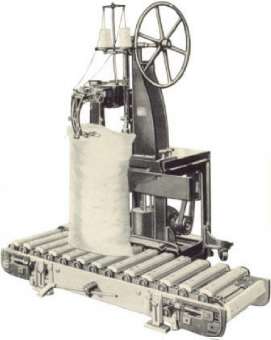 Style 21800J with head 14500 (built 1936)
The demands of the industry and our customers, the conditions of the various markets and the technology in the production changed dramatically in this century.

Union Special got the market leader in bag making and bag closing machines and developed a vide range of basic styles and attachments.

App. 30 years ago the so-called 'Baby' was born - style 2100, which was succeeded by style 2200 with a new motor a few years later. This machine can sew with one or two threads and is equipped with an upper feed which guarantees an exact feeding on all kind of materials.

Styles 2000
Hanging on a top lock spring balancer, on a neck strap for closing jute, paper or PP-woven bags, on a small pedestal for closing coin bags or with chromium plated sewing parts for sewing wet material, the machine is accepted as the best worldwide.

Styles 3000
A further development in portable machines are styles 2000 and the latest version styles 3000 as single-thread versions for light to medium heavy materials. 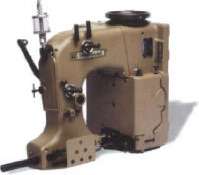 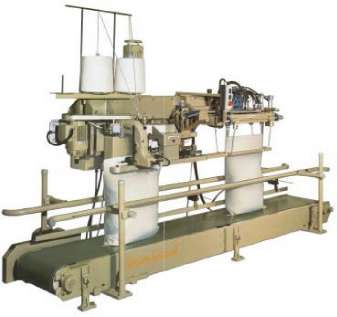 Newly developed columns, a variety of different conveyors, bag feed-in-devices, spreaders and labeling device are completing the Union Special program in bag closing units. Starting with bag making machine No.1, there have been many generations of Union Special types developed and sold worldwide. 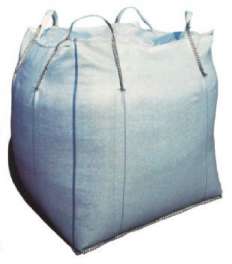 For seaming cotton and light to medium weight burlap bags or hemming bag openings Styles 56100 as double locked chainstitch machines can be offered and a wide range of heavy bag making machines of series 80000 is still in the sales program.

80200AA the succeeding Antaus, 81200A as Heracles are the most sold machines for producing heavy bags. Furthermore are available two needle machines with adjustable hemmer for heavy weight bags or geo-textiles.

Beside of the basic 81200A as overseaming machine also styles 81500 with a width of seam up to 19 mm and equipped with upper feed and alternating presser foot are recommendable especially for heavy jute bags.

80700C with pedestal
For making container bags Union Special is offering Styles 81300 as two needle, four thread safety-stitch machines with a sewing capacity up to 22 mm and an overedging seam of up to 19 mm; needle distance is 5 mm.

Series 80700C and 80700CD - one and two needle machines - are new developments for the production of container bags. These top feed machines are a must for all producers of such kind of bags. 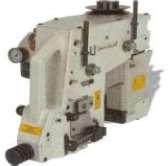 Types BC100
Here is one of the latest developments of Union Special: The new high speed bag closing machines of series BC100. A totally new design, but capable to replace the former styles 80800 on the existing columns. The machines have an internal lubrication system in a closed casting with large outside mounted oil filter, optimized sewing parts for easy processing of all known bag materials, low noise and vibration and have a speed of up to 2.750 R.P.M.- depending on material and operation.

Styles BC100 can be offered in the standard version with continuously driven nibbler knives, with thread chain pusher device or in the automatic version with automatically by feeler controlled proximity switch for start-stop and an automatic thread chain cutter by electro-pneumatically operated scissors.

These new machines are available as one or two needle machines and with a newly developed hot cutting device.